This is my review I did of a showing of the film at Chapter Arts Centre for Buzz Magazine.

If I had to describe The Red Turtle in one word, that word would be intriguing. 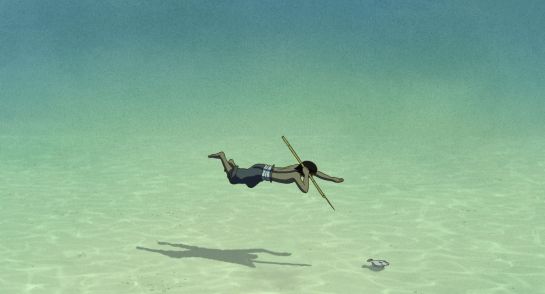 To try and synopsize it as a simple tale of a shipwrecked man and the red turtle he encounters would not only be a disservice to the film’s wondrous visual complexity but it’s universal themes. Those used to the computer-animated adventures of our favourite Pixar characters and heroes might initially view its style and approach to storytelling as unusual. If you are even the slightest fan of the work of its co-producers, Studio Ghibli, however, then its appearance will most likely be more enjoyable, though no less impressive.

In the opening scene our shipwrecked character is clinging onto life among huge animated waves; a moving image straight out of the imagination of the iconic Japanese woodblock painter Katsushika Hokusai.

We meet the titular red turtle as it thwarts our castaway’s attempts to escape the tropical island he finds himself on. After it’s death at the hands of the castaway and his reflective grief we are transported into a surreal journey and exploration of nature and life itself, a combination of captivating visual and narrative strokes. In an age of loud and brash summer blockbusters, the beauty of The Red Turtle lies in its refusal to force a specific message onto viewers. Everyone can interpret it in their own way, at their own pace and enjoy its subtle touches. This includes an amusing Greek chorus of scuttling crabs.

This is not to say the film is free from it’s dramatic and awe-inspiring moments; the brute power of nature and it’s destructive potential are also very apparent in one particular sequence. And so to be found within this ambiguity, there is also a clear, simple and profound core message which unifies all these elements, surrounding the cyclical nature of life, death and rebirth. There are also broader ecological themes which you will find in many of Ghibli’s own past output. This includes their early 1984 animated masterpiece, Nausicaä of the Valley of the Wind.

As such, it is fitting that its finely observed gestures and crisp visual storytelling should also remind us of silent cinema’s golden age. This is both emphasised by and fits perfectly with the absence of traditional dialogue and monochrome tinged night sequences.

Another key element of the film is the music. Laurent Perez del Mar’s score intertwines smoothly with the visuals on screen, integrating wood and bamboo percussion, gentle flutes and soaring strings to add even more depth to the film’s already kaleidoscopic tones.

At the very core of The Red Turtle is a universal message which transcends boundaries of language, culture, geography and age. Above all else, this is the film’s greatest strength.

Following my previous blog, take a look at a brief selection of my very favourite Mario Bava films below.

You might have heard of the band Black Sabbath but you might not know that the name came from an Italian horror anthology film from 1963. Black Sabbath provided the first opportunity for Mario Bava to shine with his use of Technicolor, instilling in his audience a spectrum of dread and fear. Bava effortlessly does so in his anthology segments by creating a strong and sustained atmosphere through beautiful visuals and engaging use of gothic tropes. The star of the show is the great Boris Karloff, whose performance in the second segment, rather interestingly, marks one of the most faithful screen representations of the titular character in Bram Stoker’s original novel of Dracula. In its original Italian cut, this builds to a truly effective penultimate story; The Drop Of Water, a tale of supernatural revenge and deadly guilt. Here the film’s subtle sound design, lighting, set design, the performance of actress Jacqueline Pierreux and a particularly gruesome wax mask prop (sculpted by his father, Eugenio Bava) combine and culminate in what many consider to be most chilling short film in horror film history. I am inclined to agree.

One of the most extraordinary aspects of Kill, Baby, Kill was its production. When it ran out of money, including that to pay Bava’s entire crew, rather than walk out, they chose instead to continue out of respect for Mario. As I briefly explained in my previous blog, this is a quintessential gothic picture and more than matches Black Sabbath with its atmosphere. Whether it is through images of black cats prowling through alleyways, crumbling and looming buildings and wisps of fog, Kill, Baby, Kill is effortlessly moody and unsettling. Bava also wisely shows restraint in showing the ghostly girl at the centre of the narrative, who is only glimpsed at through much of the film. As conveyed through Bava’s ingenious mirror image sequence, the Baroness’s villa can be interpreted as a literal manifestation of the subconscious mind. One of the more memorable minor characters is the village sorceress, Ruth, who aides our two leads. At its core is a harsh commentary on the aristocracy. The character of Baroness Graps, the ghosts mother, avoids all responsibility for her death, even when her neglectful parenting was partly to blame.

Planet of the Vampires would be one of several collaborations with James H. Nicholson and Samuel Z. Arkoff’s American International Pictures for Bava. As such this title is rather misleading; ‘Terrore nello spazio‘ or as translated into English, Terror In Space is more fitting. Their financial involvement in Black Sabbath guaranteed Boris Karloff’s role in that picture. With similarities to sci-fi classic Forbidden Planet (1953), this is one of Bava’s most interesting titles narrative wise, with a clever plot twist at its end. Sci-fi scribe Ib Melchior Eerie wrote much of the script before Bava made his own final alterations. Eerie, wide open spaces heighten the paranoia of its characters, whose mind’s and bodies are taken over by the planets invisible spectres. Planet of the Vampires is also one of Bava’s most visually kitsch and fashion-oriented pictures, with touches such as the pop-artish leather space outfits with bright yellow collars that the space crew wear. Bringing together all his skills and tricks he creates a phantasmagorical space dreamscape; a combination of polystyrene rocks he nabbed from another picture, mist machines, hyper-saturated colour and lighting, matte backgrounds and clever miniatures.

Contemporary directors, most notably Nicolas Winding Refn, director of the acclaimed Drive, have all pointed out Alien’s indebtedness to Bava’s film. At a recent screening in Cannes he told Variety “It is a truly great film. It’s melodramatic; it’s operatic; it’s campy; has great music; leather costumes; spaceships; it has really wacky dialogue in Italian that does not make any sense.”

“When you look at the two movies it’s not just similarities. It’s lifted structure, scenes, characters, dilemmas, themes that are very apparent.”

Based on the popular Italian comic book strip of the same name, this was one of Bava’s rare forays outside of the horror film genre and his only multi-million-pound production. Legendary producer Dino De Laurentiis gave the director a generous budget of £3 million yet by applying his skills and technical tricks it ended up coming in at £400,000 under-budget. Like many of the characters in his filmography, notably those in his slasher Bay of Blood (1971), the protagonist and his female partner here are motivated by greed; though Diabolik does get his comeuppance at the end. While the sly character of Diabolic, played by actor John Philip Law, perfectly embodies the director’s playful sense of humour the films comic-book origins also allow Bava to maximise his bright pop-art visuals to very enjoyable effect. This visual style is also reflected in the kinetic and lively pace of the main action and adventure sequences, such as Diabolik’s night-time ascent up a tower. In a darkly comic scene meanwhile, Diabolik shoots his main criminal adversary with the same diamonds he stole. Take a look underneath this superficial surface and there is also a clear message within the narrative of a battle between the younger and older generations, as the politicians, police and Mafia all team up to thwart our master thief.

Another interesting fact to note is that Danger Diabolik marked the only collaboration between Bava and the celebrated Ennio Morricone; composer of the unforgettable score in Sergio Leone’s The Good, The Bad and The Ugly.

You can find various examples of my online articles in the categories below. Take a look at the about page to learn a bit more about me or contact me directly at maxiedean@btinternet.com. You can al;so find me on Twitter at @MaxJDean